Overall Structure of the Universe System

Matter and Empty Universe
The Universe is created in common algorithm. The law and phenomenon natural have very simple explanation. The micro and macro universes have one genuine origin. In other words the world has one (absolutely) phenomenon of emergence display and affection beyond forties a time impression.
We don’t know what electron and core atom is. We don’t know neither what kind elementary particle composed the electron, proton and neutron. Only we suppose that it is very small particle. What structure of this elementary particles.
Just there elementary particles emitted energy when syntheses or disintegration atoms.      It is energy of super smaller elementary particle. Also we don’t know about the minimal and maximal unlimited of our universe.
The very small particles compose elementary particle. The elementary particles compose atom, the atoms compose molecule, the molecules compose sun system, the stars compose galactic, and the galactic compose the universe. So on the contrary we are consider that point is infinitely then the stars compose the atom.
So far we have accepted unanimously that the world is consisted of electrons and protons, but we still don’t know what is behind of electrons and atoms (beyond L1), neither we nor Universe our vision can imagine, galaxies etc. So we understand the matter exist is space, energy and time.

So existing the matter exist space, if exist space then curing the time. We are thinking the time is passing unturned. This is mistake, time returned.  But by other way.  Such as the water flow streaming down and water steaming evaporate to transferring in cloud, the rain bring get back and the water curing again.  As for me the time has its nature of circulation. So I understand there must be in separable inter connection between the matter is it is existing in time. The time is we understand it must have its past. So there must be a future. Only in the material Universe the time curing from passes to future. In the emptiness the future transferred to pass.
Sense the mechanism Big bang is reflection of the moment future to past transformation. As we understand, these days, due to Big Bang the Universe is spreading to all direction and dimensions (beyond L2).   The terming Big Bang is understand today as Natural cosmic disaster and we humanity is still on the way directed by this mechanism. In my view the mechanism of the Universe in our vision was not provoct by one and only such an extreme blow. The sense of existence of our Universe innumerable and continues such explosions.  Therefore you can understanding that PASS=FUTURE.
All the universe is consist over the rotary motion.  Therefore some event from time to time return at regular reiterated. Such bodies the electrons or the world are said to have a motion of vibration or oscillation.
Every rotary mechanism has its physical impact: waves. Other words the waves born from matter circulation. From general physic the waves have inter affection positive and negative. 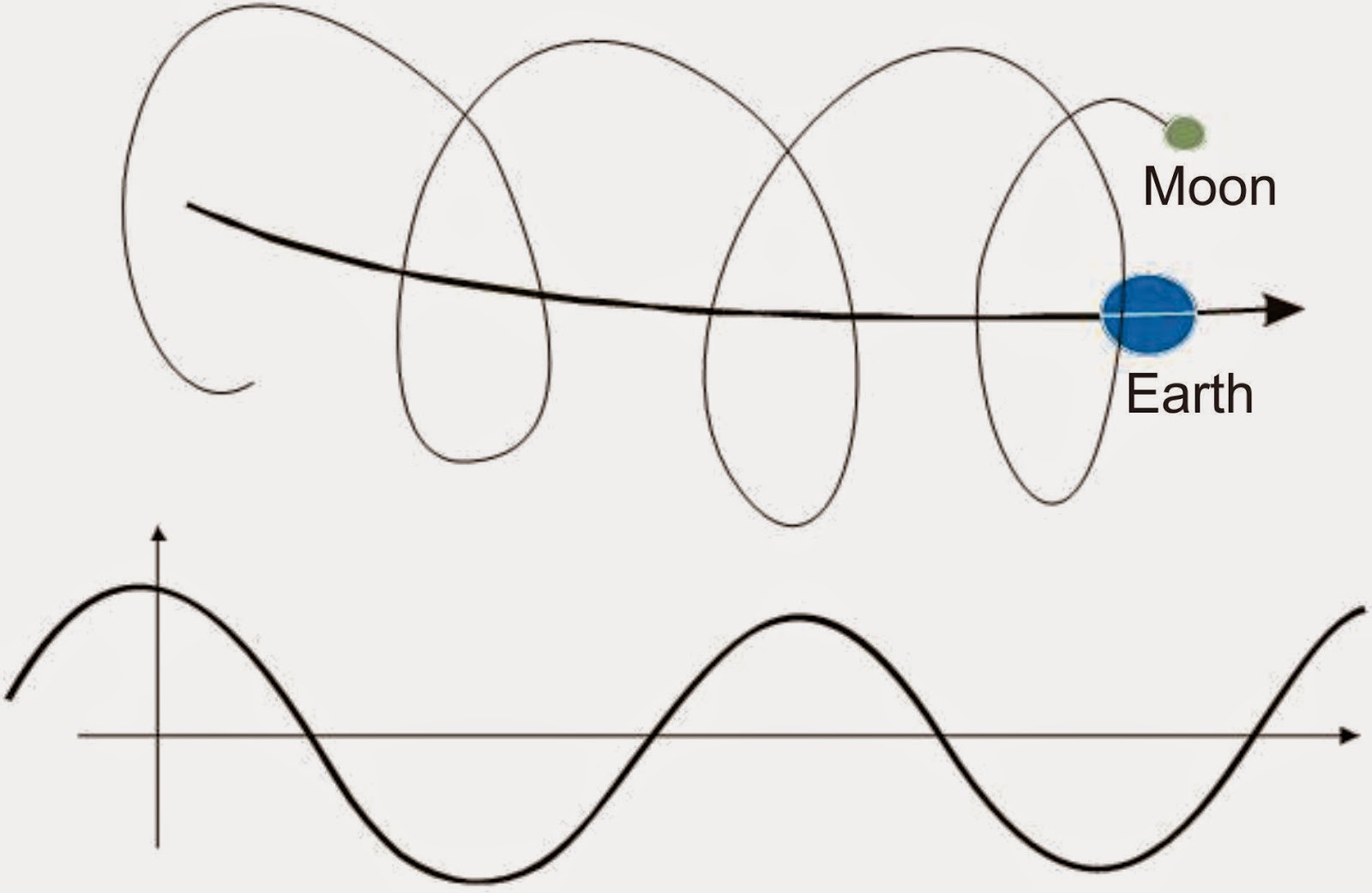 If we shall add different waves over each other the result shall produce diffraction. This kind of interference leading shape the diffraction. Rule of diffraction mechanism is under law subtraction and summation waves.  We are called this diffraction named black hole and antipode supernova.
The universe is existing   too many years eternally, everlasting. You see only short time interval of the existence.  Every material substance has its mass, speed, inertia, and circulation and rotary motion mechanism.   Black hole is not emptiness; this is only one of result diffraction of interference stars motion energy. Therefore black hole changing here disposition in long time.
And my question as when and where its shall end. I suppose the Universe unlimited; therefore the energy atoms stars, galaxies have shall reduce and disappear at the end of their tripe.  In my vision this energy shall transferred to spiritual energy.  In other words the sense of spiritual energy the existence it’s into empty realty. The spiritual energy has memory, but has no notion of the speed. Therefore information instantaneously transmitted from one part of universe to another part of world and transferred to matter.
Thus, we have arrived to the point when where no time, no mass is and neither no space, in other words there shall be they absolute Neil.

The smallest particle forming an atom or the smallest particle, which we cannot define, can be reduced without limit till it is dissolved into emptiness. A galaxy, which is a concentration of stars, as well as the re-grouping or concentration of galaxies also turn into emptiness with the reduction of energy.
The emptiness of unlimited macro-universe L1 and the emptiness of unlimited micro-universe L2 are dissolved into each other, and constitute the only eternally connected thing. In other words, L1=L2 (L1 is equivalent to L2).
Therefore
If multiply emptiness by empty we get one unit i.e. matter.
At the unlimited of universe, the energy is exhausted and transferred to spirit.  By the principle of Einstein which shows the equivalence of mass and energy, the mass will disappear and motion will stop. The matter transfers to emptiness. This is Emptiness of the emptiness.
Please don’t confuse between emptiness and vacuum. Intergalactic vacuum is not emptiness. So I mine vacuum is absolutely different of Neil.  The vacuums have space and time, in emptiness hasn’t space, energy, time and matter. If we stop all the motions of universe, the universe transferred also to empty.  The space transform a nothing, the time transform nonsense.  Some time our earth rotation motion has stopped but not definitely. Example of this occurrence is event of recent braking core of our earth. This time all mantle pressed from west to east by here inertia and create mountains flexure in east side each continents.   May be this was Noah's Ark time, rise great tsunami and cover all dry land destroy life. Clarity trace of this great tsunami leaves in Gobi Mongolia.
Actually the phenomenon of absolute Neil or Emptiness as both beyond (Beyond L1=Beyond L2) is the very sense of the existence of the Universe.   Our spirit connected with empty universe by specially mechanism of God.  When infinitely transferred point, in empty spring up rotary moment under the spirit action this moment get energy.
The very sense of Natural is rotation any kind of energy in material suspense. Due to this mechanism or law of order as soon as material energy shall develop (or transfer) from spiritual energy they strength (scope and scale) it shall gain power and motion, leading to the standard existence of material.
Energy given mass and from empty appears matter. This matters compose super micro elementary particle, the super micro elementary particles composed neutron. Then constructed the space, and appear positively and negatively charged particles. Then compose atom. Transform unlimited the matter to emptiness and from emptiness regenerates new super smallest matter. As soon as the matter comes in to existence shall be under Law of Nature rules. There are unimagined versions of matter following destine.  This destine shall depend under the law of time. Sense of law is general for whole of Nature. Every kind of matter shall have its lifespan. But where is end of existence (life and time). So sense something exists (birth present, past and future). Let’s talk about sense of Future. The sense future is the moment.
Every time renascent billion and billion new very small particles and disappearing billion and billion galaxies.   I believe that the universe has no center. Each point is the center of the universe. True of these matter flows and the expanding universe. If we close all the energy resources that our universe becoming a void.        Approximately 108 billion light-years away in limited the matter becoming also void. It is not excluded that in an empty universe arises a new energy measured matter universe. Maybe there are living plural parallel universes. But can’t explain how they exist if plural? Divided them with walls or not? Because in an empty world there is no concept of measurement and dimension.The Universe we are able to catch with our eyes and the technique we were able to design is a break capability a human being could ever produce.